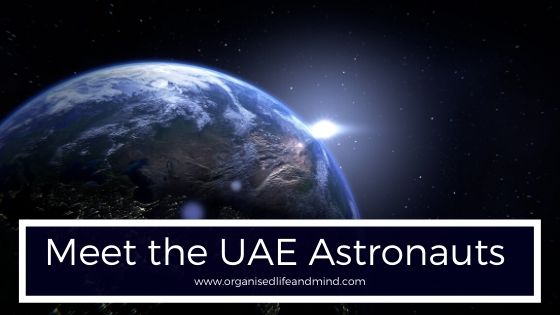 Learn how to pursue your dreams according to the UAE astronauts

Have you ever worked with any astronauts? Well, I haven’t and it was the first time I met an astronaut at this year’s Emirates Literature Festival. And what a session it was! So witty, so insightful and so inspiring.

Hazzaa AlMansoori was the first UAE astronaut who went into space in September 2019. During the mission, he spent eight days on the International Space Station (ISS). His backup, Sultan AlNeyadi, and Saeed Karmostaji, Manager at the Mohammed Bin Rashid Space Centre, joined Hazzaa in the one-hour-long session. All three certainly know to dream big!

Pursue your vision, passion and dreams – no matter what

There were 4,024 applicants who wanted to be the first UAE national to go into space, Saeed shared. As you already know, not everyone made it. Numerous tests over several rounds cut the vast majority and nine selected candidates went to Star City where future astronauts are trained. 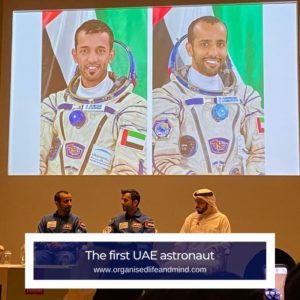 Don’t let go of your dreams

For our gentlemen, it wasn’t always a smooth process. The selection rounds was the easy part. Learning a new alphabet, learning basic Russian, sleeping upside down and surviving the many spinning rounds without throwing up… Just a few activities that dominated their training schedule. On top of that, they were separated from their family and friends. It was tough!

Have the mindset to succeed

Hazzaa is such a humble person. Listening puts you at ease and makes his trip into space sound like a breeze. Did you know that tying your shoes, a very simple activity on earth, is super difficult in space?

It was Hazzaa’s dream to go to space! It was a “huge honour” for him to represent the UAE and he proudly took the country’s flag into space. Being very grounded, he expressed one sentence over and over again: “Believe in yourself!” 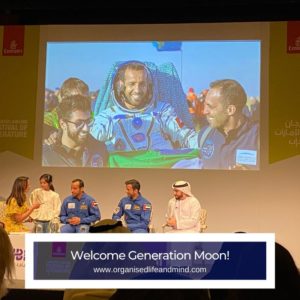 There were many thrilling and inspiring moments during this one hour. Their desire to continue no matter showed their dedication and also encouraged many, if not all, attendees. The gentlemen were excited about the upcoming generation of astronauts. Generation Moon as they called them.

Today, I shall leave you with one of the most impressive descriptions by Hazzaa: “I felt very small looking down on earth.” It puts all of our problems into perspective, doesn’t it?!

So now, who have you met recently who motivated, stimulated and encouraged you?